Stepping into the arcade, even now with its modern stores, feels as if you have walked right back into 1870. The Royal Arcade was the first and longest standing Shopping arcade in Melbourne and of all the Australian colonies. A gentleman by the name of, Mr Joseph Moore originally purchased the land where the arcade now sits in 1837 for just 20 pounds. A competition for the design of the arcade was conducted in England and the winner Mr Charles Webb completed his vision in 1869. 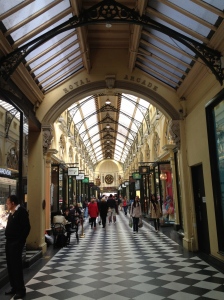 The Royal Arcade from the Bourke Street Mall Entrance

The Royal Arcade has since been home to some of the most niche specialist stores in Melbourne. Now home to jewellers, toy stores and boutiques there is more behind this stunning arcade than what is on the surface.

Whether or not you believe ghosts exist, many people claim to have spotted a ghost like figure living with the royal arcade. The woman with the spinning wheel resides in an empty second floor storage space above the main walkway. Sources say that they believe she has been drifting through the building for many years as she has often appeared with a spinning wheel. 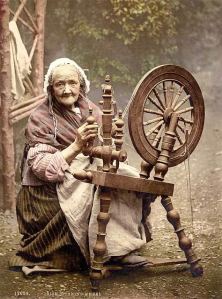 How Historical Gossip imagines the ghost of the royal arcade looks

From contemporary stores to the supernatural the arcade has it all especially when it comes to the beautiful architectural design. In 1892, Gog and Magog arrived at the arcade and have remained a staple of the space for 120 years now. Gog and Magog are two giant statues representing similar statues on display in England and also mythical objects that display the conflict between Britain and Trojan invaders.

Gog and Magog – the giants watching over the arcade

The Arcade can be accessed from Bourke street Mall and passes through all the way to Little Collins Street a small entrance was also opened at Elizabeth street. There is more too see and many more stories to hear just have a walk through and chat to the locals.

For more information about The Royal Arcade you can visit their website at http://www.royalarcade.com.au 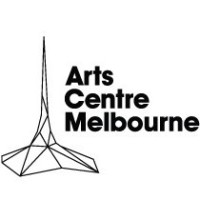 A blog from Arts Centre Melbourne's amazing Australian Performing Arts Collection, delivered to you by the Collections team.